After abandoning the idea of replacing my personal Windows device with Linux due to the USB dock/external monitor/instability hell (you can follow that journey on my blog starting here) I still haven’t given up on finding ‚my‘ Linux for at least carrying it around with me on occasions. Recently, I read, on some newsfeed or another, an article about Deepin Linux which prompted me to have a look around at other desktop environments that KDE and Gnome. While I haven’t considered Deepin proper, it coming from China and all, my research led me to Elementary OS.

My HP notebook from the initial 100 Days experiment is currently busy elsewhere so I used my old trusty Latitude E7440 – still a good enough workhorse that unfortunately has no camera built in.

In order to download the ISO from the Elementary website you have to pay but the actual amount is up to you. I am sure there are ways to circumvent this but I chose the straight and narrow and paid a small amount. The downloaded ISO is about 2.4G in size and contains the (at the time of writing) current version 6.1 Jólnir.

The installer is super polished and asks exactly the right questions, including the offer to encrypt the boot disk up front. There is also a „custom install“ mode which offers all the usual you would expect to see in any Linux distro. Some things are not quite as you would expect but those are minor annoyances:

Shortly after the first logon, you are prompted to install some updates. At the time of writing, there were 9 updates with the OS itself counting 55 components as one update item.

Installing in a Hyper-V VM

On their website, the Elementary team very explicitly discourage you from running their OS in a VM. But you can absolutely do so, an even create a Gen 2 Hyper-V VM for it. You just need to change the SecureBoot template from „Windows“ to „UEFI Certificate Authority“ in order to allow the installer to run, but other than taht, you’re good to go.

What’s in the box

Regarding the desktop environment itself, Elementary did to Ubuntu what MacOS did to BSD. A human-friendly, responsive interface. I have played with Elementary for several hours, and not once it has fallen back to anything „Linux-y“ beneath the GUI. Big compliments to the team on this front.

You are presented with an empty desktop featuring a photo wallpaper and a macOS-like dock containing more or less all pre-installed applications:

In addition, you’ll find a calculator app (very basic) and a code editor (just a text editor, no IDE). Although the latter sports a Git icon on the „open project…“ area, Git is not installed as a part of the basic OS install.

Right after connecting to the Wi-Fi network, the laptop recognised my network printer and installed a driver for it.

Windows Phone, I feel you…

Promising as the OS itself may look, the AppCenter turns out to be the biggest disappointment. It sports several app categories you probably would expect to find, like „Accessories“, „Games“, „Communication“ or „Development“ but many of them are either nearly empty or full of For Pay-Apps aimed at things I personally hope are a part of the OS itself like a „Mixer“ for $3.00. „Accessories“ seems to include all the other categories as well which is confusing.

Here’s what you’ll find (at the time of writing) under „Communication“: 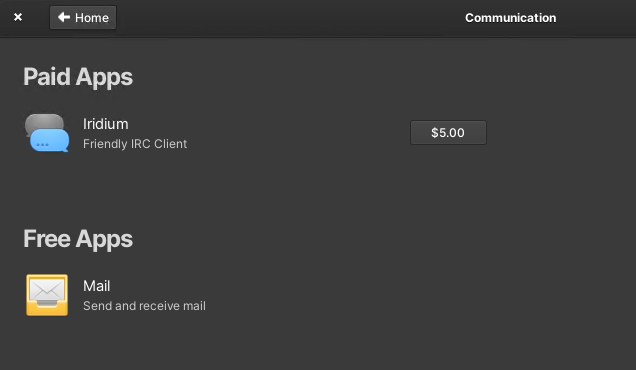 At least „Education“ is all free (but mostly useless):

This reminds me painfully of Windows Phone: The (arguably) best user experience but no apps to actually experience it with. We all know how it ended for WP.

Unlike Windows Phone, however, Elementary has a popular OS at its core: Ubuntu. So even if the AppCenter doesn’t offer that may apps, it should be possible to just install the apps of our choice form the repos or even from downloaded DEB packages, shouldn’t it? Unsurprisingly, it works. However, Elementary discourages you from installing DEB packages by not including „Install“ as an option in the context menu for this file type.

Here’s what I tried:

Which makes me „good to go“ with the new setup.

But wait, what about the USB dock and external monitors?

Well, Elementary’s been so good so far that for half a second I expected to be able to just plug in my dock and have my monitors magically come to life… sadly, no such luck. I guess I’ll have to install the DisplayLink Ubuntu package and pray.

The basic installation worked (had to install the Linux headers first) and the monitors got recognised and activated after a reboot. So here’s me keeping the fingers crossed 🙂

Summing it all up

Elementary is definitely worth looking at (and a pleasure to do so). While I do understand them only including a small selection of „elementarised“ apps in the AppCenter, for a macOS or Windows user looking to switch their desktop OS as advertised on Elementary’s website this is definitely not good enough. For me, however, it’s OK since I’m not afraid of the command line so I’ll be keeping the OS for a while.