Installing a modern Linux distro on commercial-grade hardware does not pose any real issues, nor had I expected it to. To create a bootable medium, I first tried UNetBootin, because this is what I used many times successfully in the past. On the Windows 10 laptop that had died, if you remember 😉

Mint worked like a charm. CentOS and openSUSE, with 8 GB and 4.5 GB ISO size, took forever to create the USB medium, and the resulting stick would not boot over the Mint install since the GRUB on the stick apparently detected the GRUB configuration on the disk and didn’t know what to do with this duplicity.

I am sure I would have figured it out eventually, but that was not what I had in mind with this experiment. So i tried the other option that had served me well before and downloaded Rufus. Much to my surprise, both the media creation time and the end result were considerably better. I was able to install any of the remaining distros over another without any issues.

I liked openSUSE Tumbleweed. A LOT. It has that professional feel about it, starting with the rotating wheel and vendor logo on the boot-up screen. The pre-packaged themes and colour schemes, the choice of default applications, the online software repository – all looked like a system I could definitely spend time with. The necessary basics, like PowerShell or the printer, worked as described in the documentation; having to authenticate the Wallet every time the laptop wants to connect to WiFi is something I am accustomed to from my KDE (non-Plasma) desktop on CentOS 7.

I only noticed that my initial choice of distro might indeed not have been optimal after I was finally able to power down my work laptop and went ahead connecting my desk setup to the openSUSE box: the i-Tec docking station with the two monitors attached to it via HDMI-to-DVI adapters. As has invariably been the case with any OS I ever threw at it, the built-in NIC and the USB hub got recognised and activated without issue, as did the keyboard, the mouse and the USB headset. The monitors, however, remained dark.

I knew from my CentOS 7 experience that there is a downloadable driver package from i-Tec. And, while it says Ubuntu in the file name, there’s a PDF inside with links to community-provided drivers for several other distros. You probably guessed it by now: openSUSE is not on that list. And, while there are three unsupported community packages for DisplayLink in the Tumbleweed package store, none of them worked with my setup. The best result I ever got was the monitors being recognised for what they are (in terms of model, connector, resolutions and frequencies) but no matter what I tried (within my limited abilites and time), they never came to life.

Playing around with Tumbleweed reinforced my decision to stick with KDE Plasma. So the next best thing on my list (see ‚the Choosing‚ if you haven’t already) would be KUbuntu 20.04. This distro is explicitly supported by DisplayLink, there being a dedicated Ubuntu 20.04 package in that zip file. Beside the obvious items like belonging to a different Linux ‚tribe‘, there are two big differences pertaining to my intended use:

The DisplayLink installation went smoothly and produced the desired effect: Both monitors get recognised, deliver a picture and allow for individual configurations according to geometry.

A big surprise was waiting for me in the printer management applet: 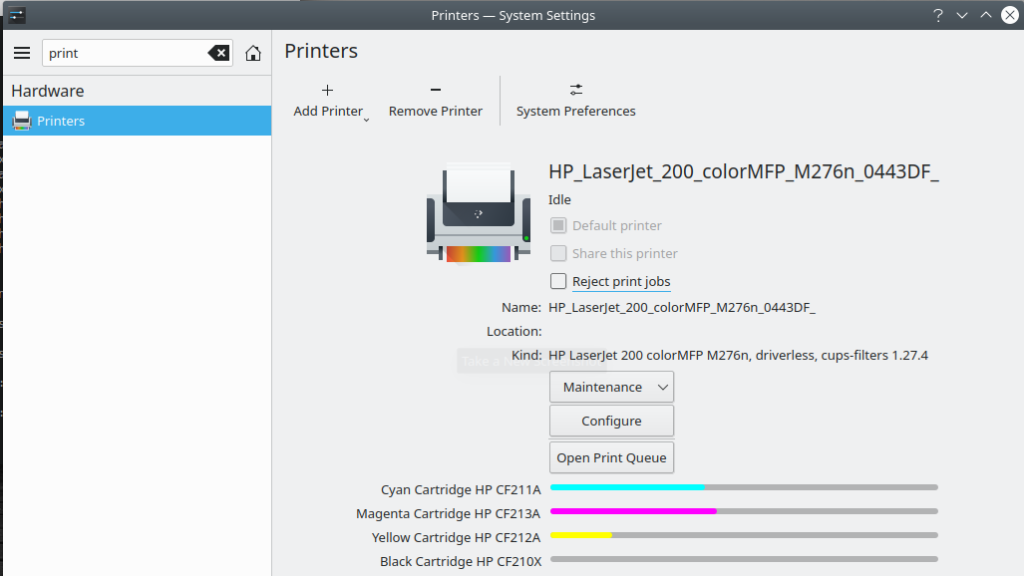 (Yes, I know that I should consider replacing the Black cartridge.)

Under openSUSE, I had to add the printer manually and, while it did succeed (using a random Color LaserJet driver from the list), it was a manual process. KUbuntu apparently has Bonjour integration activated so saved me five minutes. Thanks for that!

On to PowerShell and VSCode. For PowerShell, after I made sure that no version of PowerShell is indeed contained in the Ubuntu 20.04 repo, I went ahead and did the ’neutral Linux‘ install: 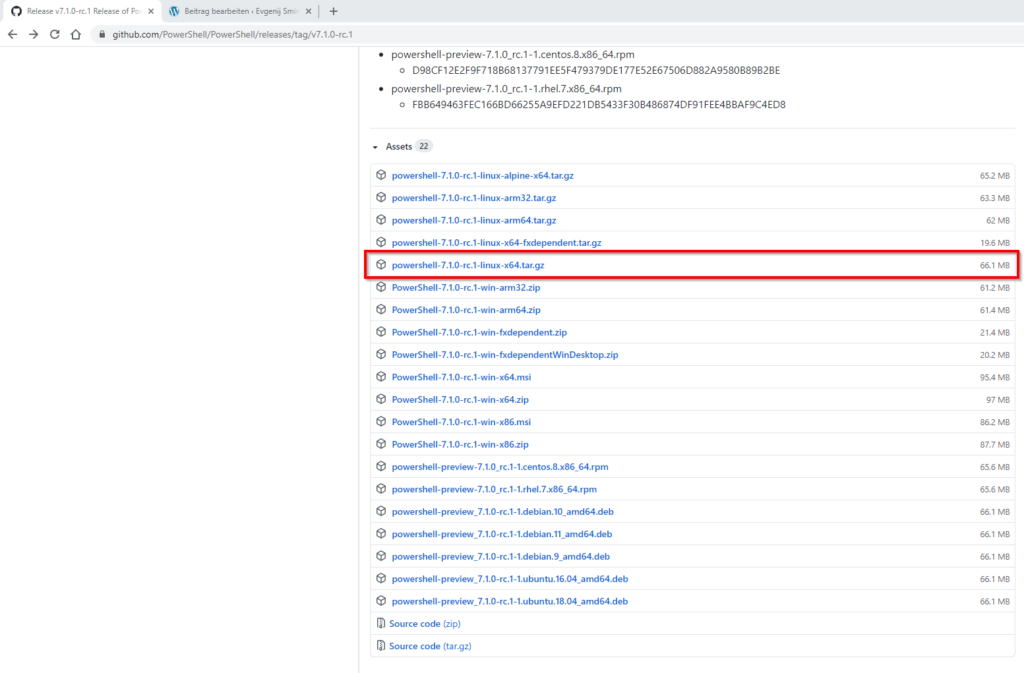 Which is basically the same installer and the same procedure that had to be applied on openSUSE, with the only difference that it would have been supported there. I am happy to report that everything I have tested so far works on Ubuntu 20.04 as well!

For the VSCode, I downloaded the DEBIAN package which installed without any issues. I was able to add my desired extensions which is all that I require for happines on that front.

The last two remaining items for today are the Jabra headset and the webcams (the built-in one and, more importantly, the C920 hooked to the USB dock). The earbuds connected at first attempt and there is no audible difference to the Windows 10 laptop.

For testing the cams, I my first thought was installing Skype (which I intend to use anyway) but it’s only available from the Discover store as a Snap package. This technology is new to me so I decided to read up on it before actually using it. The official ’skypeforlinux‘ package depends on ‚gnome-keyring‘ which is not available on KDE for obvious reasons. So I took the path of least resistance and went for Cheese.

Cheese detected both cams flawlessly and offered resolutions according to the model, the built-in one being fairly basic at max. 640×480 and the C920 going all the way up to Full HD and beyond.

All is well that ends well

Just for giggles, I connected my POLAR watch. Unsurprisingly, it didn’t pop up in Device Notifier but, like I said in the opening post, the Android app is enough for my needs.

That’s all for today. Time to wrap up this blog post (I’m writing it on my new Linux box! Yay!) and do something useful for a change. Tomorrow I’ll go hunting for apps.