With the distro of choice set up and all hardware confirmed to be working, it’s time to start looking for the apps I would require to fulfill my daily computing needs. I will try to use the Discover store as much as possible

While I am at it, I will also attend to some of the smaller things that may be specific to Linux or just part of the ’new PC‘ experience.

Tapping on the trackpad

This one has annoyed me every time I put Linux on a laptop but never enough to actually investigate and correct: The left mouse click by tapping the trackpad is disabled by default. Thanks to the excellent guidance found here I was able to rectify it with just three shell commands.

The process to persist the setting over the end of the session is slightly different but worked well nonetheless. Why KDE is missing a touchpad settings applet is beyond me, though.

I have yet to figure out what the difference is between „Add to Panel (Widget)“ and „Pin to task manager“:

Task manager seems to produce smaller and crisper icons that get converted to task panels when you actually start the applications. Panel (Widget) icons stay where they are, are slightly larger and of lower quality. The next 97 days will have to show if there are more substantial differences 🙂

First order of business on today’s personal desktop is, of course, web browsing. If nothing else, this blog wants to be written, and of course I appreciate all the help getting around my new OS I can get for free just by googling 🙂

I like having multiple browsers at my disposal. KUbuntu came, like every other distro I tried, with Firefox preinstalled which has been my default browser on Windows for many years before Chrome and Edge Chromium started taking over that spot.

In the Discover store, Chromium was offered along with some browsers I don’t know so I went ahead and googled some. This list was very helpful, and I decided to add Opera as my third browser until Microsoft releases Edge Chromium for Linux (which is due any moment but not yet there at the time of writing).

The install procedure described in the post linked above worked, apart from some malformed entry in my sources.list which went away after deleting and re-adding the opera repo.

While the default font on some pages feels unfamiliar, I tried every website I visit daily, and all of them worked without issue both in Firefox and Chromium. No surprises here.

‚Mail & Co‘ in my usage scenario consists of three components:

Since virtually every mail client out there speaks IMAP (or so I thought), let’s look at the Microsoft account first.

The MailSpring route looks promising so I will try that first. The app requires you to create an account with them (but they promise that the details of e-mail-accounts are never sent to them). Having done that, I am greeted with some interesting options: 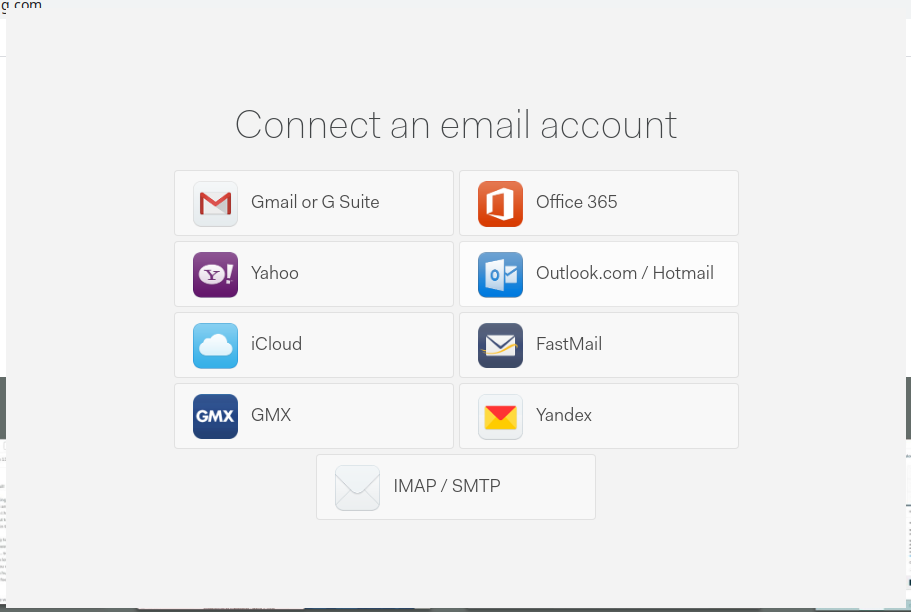 Whoa! Outlook.com connected flawlessly and pulled the few emails I have in the Inbox as a matter of seconds. Still, MailSpring definitely does not have a calendar on board so not an option for me.

Hiri works flawlessly but I am reluctant to shell out money for a product with this history. Still, this definitely is an interesting pricing model: 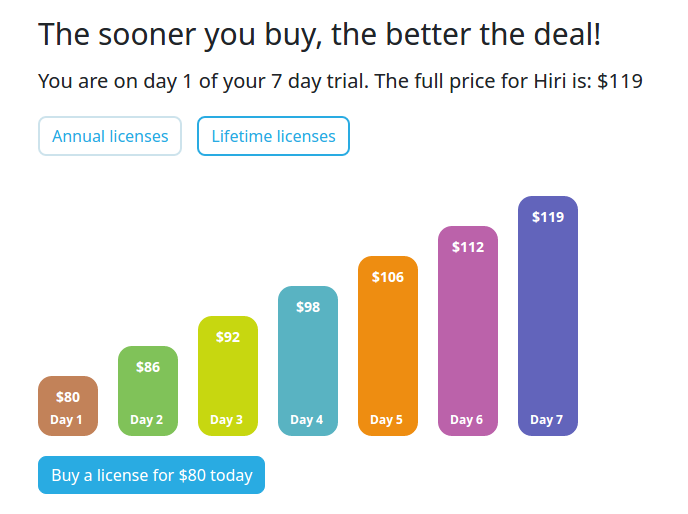 An attempt to add another account to Hiri discovered its weak spot for my usage scenario. This app supports Exchange and Office 365 exclusively, i.e. there is no way to add my IMAP accounts to it. So it would be $80 for exactly the same functionality I am able to get off the outlook.com website.

The next attempt was the native KOrganizer app that failed miserably at connecting to Outlook.com, although it did show a web pop-up that asked for password. But even if it did, the UI of those apps is so 1980s…

The Thunderbird + TBSync + Owl combo works. $10 per year is a reasonable price, and the first month is free. I am accustomed to using Thunderbird on Windows so will stick with that for the time being. It is, however, really disappointing that there doesn’t seem to be an email app for Linux that is on par with Outlook both in terms of integration and visual appearance.

KDE Plasma comes with KRDC preinstalled. Since I only use RDP to connect to my Hyper-V hosts, it more than serves my needs. The start menu icon is way slicker than the actual user interface, though ;-).

In a previous job, my work laptop ran Windows 7. Much as I would have loved to have Hyper-V at my fingertips, it was out of the question at that time. And since I hadn’t a personal laptop then, I resorted to what was possible, i.e. VirtualBox. Since there’s no Hyper-V to be had on Linux either, I went for what I knew and was not disappointed: 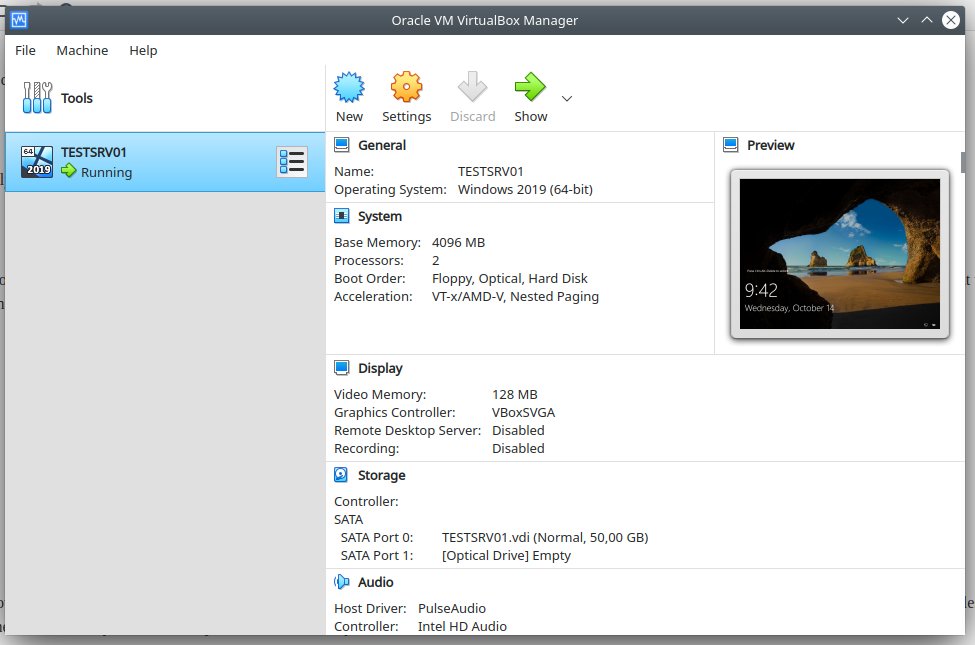 The familiar UI, ‚just works‘, a default NAT network with DHCP and a gateway is delivered out of the box.

OneDrive is where my personal files live. While attending the Ignite 2018, I asked the team at the OneDrive booth whether there are plans to make a native Linux sync client. The answer was no back then, and apparently nothing has changed, much as ‚Microsoft <3 Linux‘ these days. So let’s see if we can scare up an alternative.

*THE* alternative these days seems to be the ‚onedrive‘ package. However, the official Ubuntu repos list an older version that is no longer able to authenticate against the Microsoft cloud. After following instructions for adding an untrusted repo found here it would install, successfully authorize and download all my files.

After that was finished, all that was needed was to register OneDrive as a service using instructions given here.

A quick search in the Discover store came back with KeePassXC. It opens my KDBX files and, after being edited and saved, they open with the current version of KeePass on Windows. And that would be the end of it, but… *every single* KeePass compatible password manager offered for my KUbuntu system is delivered as a ’snap‘. I really have to find time to read up on the technology.

But for today, it works and fulfills my expectations.

My ‚gold standard‘ for screenshots on Windows is GreenShot. The screenshot daemon + editor combo is easily the best thing available – free and open source, no less. I write tech blog posts, articles and presentations, and I never missed a feature here. So how easy will it be to replace that functionality?

KDE Plasma comes with Spectacle, which is decent enough as far as taking screenshots is concerned but lacks any editing capability. A quick search unearthed Flameshot which allows for frames, arrows, blur and text. The UI concept is unfamiliar but something I think I could get by with long-term. The only feature that is really missing compared to Greenshot is step numbering but I do not use it all that much.

The screenshots in this post were made by Flameshot.

I think I mentioned it already: I suck at graphics but have to edit/crop/resize a picture every now and then. The search for Paint.NET alternatives uncovered Pinta which is almost identical to Paint.NET in appearance and handling. Hopefully in terms of stability and compatibility, too!

The Spotify app from the discover store looks and feels identical to the app from Microsoft store. It accepts my login, shows my playlists, and plays  my music. Happy days!

What a day! I have certainly learned a lot. But the office applications and the dev stuff will have to wait for another day.